Who are the best customers for old hands that spin and weave?

The day after India celebrated 60 years as a republic, MESH’s student designer, Syamala and Jacky Bonney took a night train to Dehra Dun a town just below the foot hills of the Himalayas to visit KKM an old leprosy community on the edge of the town. KKM has exported cotton handloom products to Europe for more than thirty years. The colony is one of a group that has long served severely disabled people providing a place to be, just away from general society that is unfriendly towards people affected by leprosy. 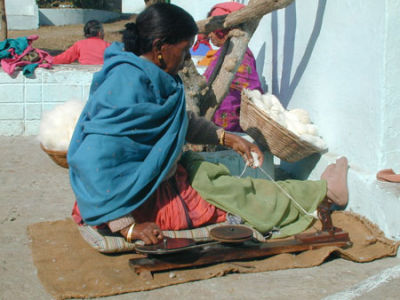 Spinning in the winter sunshine
Here in KKM men and women, now old, having worked quietly in their small peaceful community for decades still hand-spin cotton and weave it into swathes of cloth, bands of tape or strips of stoles. One or two tailors hem. Other old hands tie tassels and runners, bags, stoles and baby carriers are packed by still others before being taken to be shipped to finally grace the homes of Europeans and antipodeans. 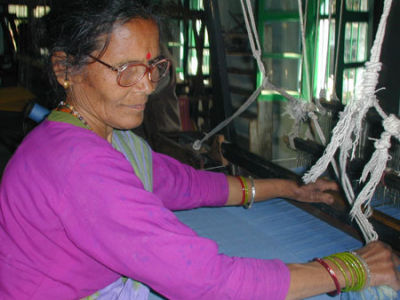 Hands, old and bent but busy
The men and women of KKM represent the purest of the groups that MESH would like to work with. They do not employ the children of the people affected by leprosy, they have not merged with other disabled people and now they are old and many are tired. KKM receives generous donations so the lives of the members are cared for with clothing and food ration and they have small comfortable homes; their children have studied and many have very good jobs and send home support. Their efforts over the years have been to faithfully work at spinning and weaving, sewing and packing. Their best customers are those who will wait for their measured production and do not set urgent deadlines and hard to keep factory style standardisation, for the artisans are old, poor of sight and twisted fingers cannot be nimble. It is the patient, kind and truly alternative buyers who are keeping these elderly people in dignified and cheerful employment. 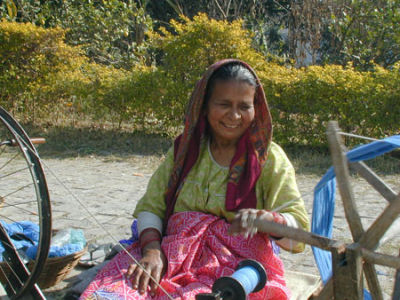 Bobbin winding
Pierre who has lived and served amongst these gentle people for so long asked me to make sure that people hear about his friends. They have many old stocks and MESH is hoping to buy some and either sell it on or convert it using tailors in other leprosy communities. As these folk grow old there is a need for the few young members to learn skills that will allow them to serve their older colleagues and for some voluntary support to ease the business of running KKM and its sister organisations.
Next
Previous