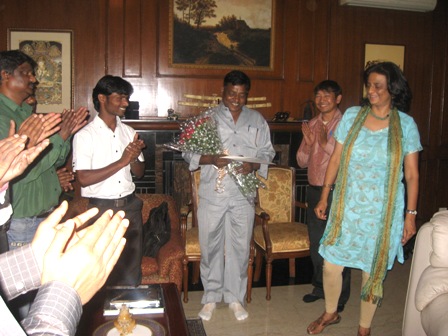 We have just had another celebration, this time to honour Mr. Bachan Singh, one of the MESH Delhi team who has completed more than 25 years of service with MESH

Bachan Singh joined MESH first as a watchman but soon graduated from the bottom up to a driver and important member of the chicken delivery team. Under the management of Joan Nabert he learned how to pack the goods for export and keep careful packing records. In more recent years he went for basic computer training and took on the challenge of keeping stock records. It was a huge responsibility which often saw him floundering but he has struggled on and overcome most of the difficulties, learning something new every day.

Bachan is from the Garhwal hills and although he tried to bring his mother to live here with him she could not settle so he and his wife decided he would stay here and she would stay in the village with his mother and the children. So this is really a celebration of Mr. and Mrs. Bachan’s loyalty and work for MESH.

It was great to hear what his colleagues had to say about his work and friendship and perceptive of MESH Chairman to have noticed that those early days when the team was very small and Joan Nabert was the head of the "family" have moved on through a couple of decades and the same family spirit still pervades in the organisation. 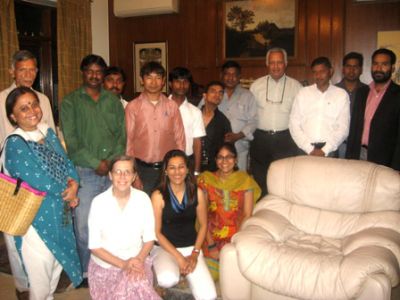