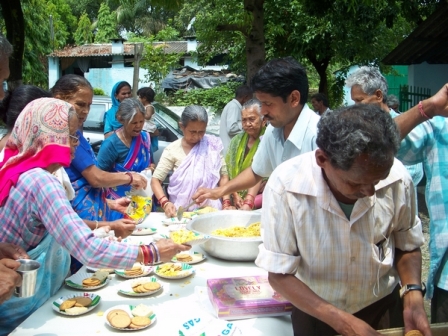 Kripaon Ki Mata (KKM) Leprosy Colony, Dehra Dun, India celebrated their Golden Jubilee on 2nd of July. Rumal Singh, K.Bangaraiah, Madan Singh, Santosh Ram and Noel who are all members of the colony committee have written describing the gathering of colony members and clergy to mark the occasion. The write that after the the formal welcome of guests ...

"A brief history was mentioned about how the Colony was started and how it had developed into a production centre of hand woven textiles of export quality, about the Colony’s rehabilitation efforts extending to other leprosy settlements and the formation of our Federative Society in the name of “K.K.M. Handweaving” in the year 1971. A word of grateful thanks was extended to all the volunteers from different countries who gave their invaluable services
for the development of the Colony and our working groups. The lifetime services of Agnes Kunze Mataji were remembered with deep gratitude. The work being done by Bhai Pierre Reyniers since 1967 was given a hearty appreciation, wishing him good health to be able to continue with his work.

A number of people have given their testimonies sharing their experiences, expressing their gratitude for all that they have received, expressed their wishes for a fruitful continuation of the Colony in the future.

To each and everyone a brass tumbler was presented to mark the auspicious occasion, through the hands of Rev. Father E.I.Matthew with his blessings. Inscribed on the tumblers was, “K.K.M.Colony Golden Jubilee 2 July 1962-2012”."

I was thinking about what has changed in those fifty years. In 1962 dapsone was the treatment for leprosy, it had been introduced in the 1950's and was thought to provide a cure. Sadly over time. the leprosy bacteria grew resistant to dapsone and people who thought they were cured were surprised to find themselves once again developing new symptoms. Then in 1984 multi drug therapy, a wonderful cocktail of medicines which rendered the patient non-infectious almost at once and which need not be taken for more than two years was introduced. The Government of India instituted a nation-wide survey, detection and free treatment programme in conjunction with non-government organisations. Many people were diagnosed and treated early before any long term effects could set in.

That was already to late for some of the people living in KKM who were already disabled but under the wonderful care of Agnes and Pierre the people were able to live a simple but peaceful life of useful work.

The children have grown up and been well educated, many are fully integrated into general society and work as nurses, teachers oil engineers and some even run their own businesses.

The people now living in KKM may be old but they almost all work and their products are still exported around the world. I would say it has been a very important 50 years for them and their families, I am so glad to know them.