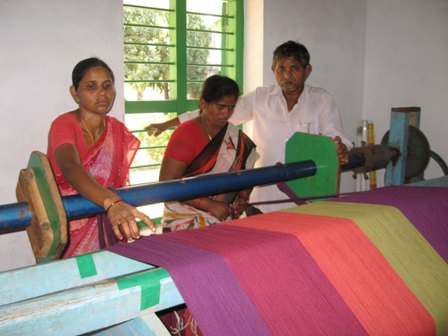 Yohei Sasakawa, has completed ten years as WHO Goodwill Ambassador and in May this year was reappointed to the post. During the decade of his tenure 121 countries have eliminated leprosy as a public health problem. Brazil, which has not achieved elimination yet has prepared a plan and declared that they will also eliminate the disease soon.

Eliminating a disease as a public health problem means that there are less than 1 in 10,000 people affected by it in the population. It is just a step in the process of fighting the disease; it does not mean there is no longer any leprosy, or any people left with the physical, social and economic effects of leprosy.

The focus of MESH's work is to try and provide work opportunities to people affected by leprosy and their families and it is fair to say that a group of artisans in a small weaving workshop in a leprosy colony in Faridabad (say) can feel a real sense of pride when their products are sold around the world. Pride, the dignity of employment and money to feed and educate your family...people affected by leprosy and other people with disabilities want those things too.