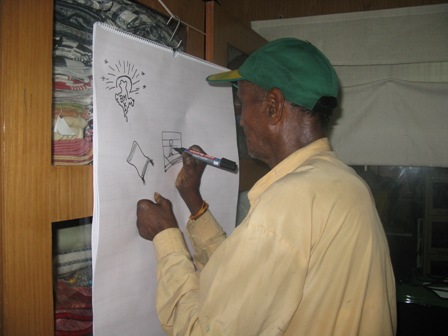 In the last few weeks we have conducted two marketing workshops to guide our suppliers towards ways in which they can sell their own products directly in their locality and the bigger cities around India, rather than depending upon MESH for sales.

The first in Delhi was for 17 artisans from nine producer groups from the Hindi speaking regions of northern India. Pankaj Mehndiratta and Annandhi Desraj conducted three days of sessions covering everything from identifying market segments to costing and pricing and logos and labels. There were videoed role plays allowing participants to practice selling their products to a new potential customer and we managed to arrange appointments for three people to meet retailers here in Delhi and present their products.

The second workshop in south India at a lovely seaside location south of Chennai was for 11 artisans from five producer groups and three staff from a Leprosy Mission Project involved in marketing for disabled and marginalised artisans in Tamil Nadu. The challenge for Annandhi especially was conducting the workshop in Tamil and Telugu and then discovering that there was one participant who understood only Hindi! Mary Rani from MESH Hyderabad provided support with Telugu and all the topics were covered albeit with a great deal of effort.

The manager of Catamaran, the eco-tourism centre we stayed at for the southern workshop, spent one hour looking at producer group products and showed an interest in displaying in the centre products from three groups.

The groups must now follow-up with these new contacts. They each have a target of three new customers in the coming four months so we shall be keeping in touch to see how they are progressing.

Both workshops were part of the capacity building element of a project funded by IM Soir, a Swedish agency that has supported MESH's work for a number of years.

The exercise to create simple logos and labels for their products proved no difficulty for Mr. Achevar Yadav from KUKA, Najibabad who is seen in the photograph here. MESH has funds available from the Leprosy Mission India Trust project to assist groups with new labels and some of the simple ideas that came out of the workshops we shall be taking up with label makers.

Today is a public holiday to mark the birth of Mahatma Gandhi, with his tender attitude towards people affected by leprosy I feel sure that were he here amongst us now he would be delighted to see Achevar taking such an active part in this workshop.