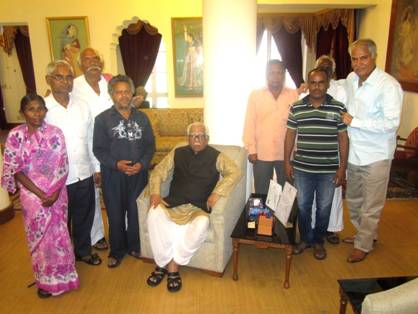 We are pleased to inform you that Mr. Ram Naik after being appointed as the Governor of Rajasthan took the oath of office on 8th August evening and the next day Hon’ble Mr. Naik invited a delegation from Sarthak Manav Kushthashram (SMK) at the Raj Bhawan (Governor’s House). This was an informal meeting and he took the stock of ongoing activities and the status of leprosy affected persons in Rajasthan. The group was led by Pandit Prem Narayan, State Leader of Rajasthan, Mr. Bhairab Datt, Secretary and Mr. Suresh Kaul, President of SMK alongwith Mr. Pitamber, Mr. Shivnarayan and Mrs. Neelmani all inmates of SMK Galta Ashram and Mr. Nihit Kaul. Hon’ble Governor was apprised of all the welfare activities run by SMK and also those supported by the Government of Rajasthan.

Mr. Ram Naik has been associated with the cause of leprosy since more than 2 decades. The first introduction with the persons affected by leprosy is said to be had with leprosy colony of Borivali Mumbai, where Mr. Bheem Rao Madhale was the colony leader and now the State Leader of Maharastra Kustha Pidit Sanshtan. Mr. Naik has also been instrumental in filing the Petition for the welfare of the persons affected by leprosy in the Rajya Sabha (Upper House of the Parliament) through the platform of National Forum India under Chairmanship of Dr. P. K. Gopal. It was at the initiative of Hon’ble Mr. Naik that National Forum India filled this petition and subsequently the Parliamentary Standing Committee visited a number of leprosy colonies in various parts of India and had met the Colony Leaders and others living with lot of difficulties in various parts of India. After this Mr. Naik had repeatedly been sending reminders to the leaders of the Parliamentary Committee to instruct the Government of India and take stringent action by various Administrative Departments for addressing the issues related to the people living in the leprosy colonies. The present Governor is also the President of International Leprosy Union, Pune.

During the meeting Pandit Prem Narayan briefed the Governor about activities run by SMK via. Medical & Health, Education, Rehabilitation and Awareness and Community Based Rehabilitation etc. The Governor was concerned and keen in knowing the difficulties and problems faced by the colony people in Rajasthan and asked for issues which need to be solved in Rajasthan for their welfare.

Here are some photographs of this esteemed occasion: 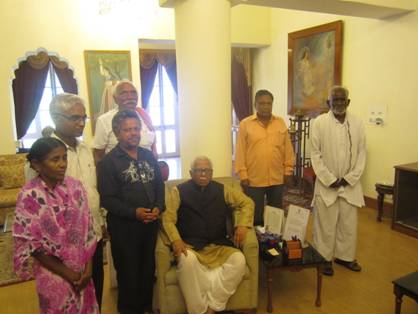 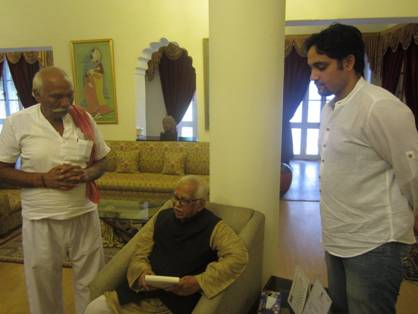 On the next day the 10th August 2014 the Committee Members of Sarthak Manav Kushthashram again called upon the Governor of Rajasthan on his instance at the Raj Bahwan and gave their written memorandum concerning demands for empowerment and rehabilitation of those who are still unprivileged and un-reached. The demand raised in the Memorandum submitted to Mr. Naik were regarding following issues :

i. The pension amount being paid to the leprosy affected persons in Rajasthan is at present Rs. 500/- per month, which should be raised to Rs. 2000/- per month keeping in uniformity with other states as this issue is already mentioned in the Petition submitted by the National Forum India in the Rajya Sabha.
ii. All leprosy affected persons should be considered suamotto in the category of BPL, as they all face discrimination in the society on various grounds.
iii. The children of persons affected by leprosy should be considered for freeship while going for higher and other technical studies.
iv. Due to the stigma and discrimination, their children often don’t get easily the employment opportunity and hence the State Government should consider for their reservation while seeking employment.

Mr. Ram Naik agreed with all these issues faced by the colony people in Rajasthan and assured the delegation of SMK to recommend strongly to the Chief Minister Rajasthan Mrs. Vasundhra Raje for addressing these demands and solving these issues by the welfare state in favour of the leprosy affected persons.

Pandit Prem Narayan and Mr. Suresh Suresh Kaul alongwith other delegation members express their gratitude to the Governor and thanked him for these 2 important meetings at such short intervals.

Photo of the day is given below 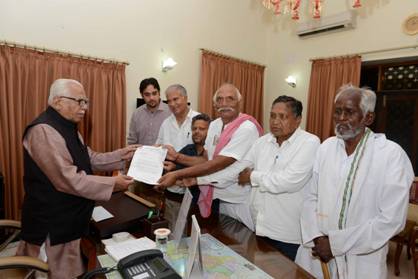 With best wishes and kind regards,