Our Kashmir Artisans need a bit of a lift up! 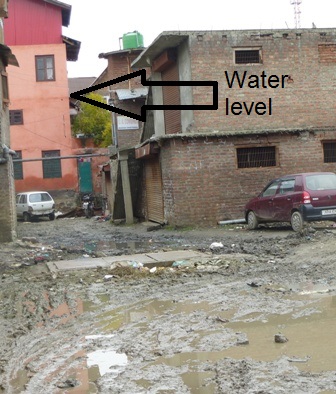 Almost two months ago terrible floods tore through Jammu and Kashmir destroying homes and livelihoods in a few days. MESH buys from Care Kashmir, an organisation based in Srinagar, the capital, and one of the areas badly flooded. MESH also buys from a family of embroiderers where three of the sons have muscular dystrophy. They live in a village twenty kilometres from Srinagar but in a flood plain.

It took a couple of weeks for communication to be restored and we then learned that our partners in the region were safe but that they had suffered some losses. Now Johnson from MESH staff team has made a visit and met the artisans and heard their stories and now we know their needs.

Significant is the fact that each of the artisans has started back at work, whatever the losses or difficulties they cannot afford to sit and wait for something to get better, they have adjusted and are working again. I am convinced that the best way to assist them through these tough times is to place orders but there are some other needs that we hope to help with.

Our main contact, Sajad Ali was not affected directly by the flood as he lives on a hill. As soon as he could he went to visit the papier-mâché shape makers and leather workers with whom he works and he coordinated Johnson’s visit.

Sajad had told us that Shakeel, one of the leather workers, had lost all his raw material when the under-floor storage space in his home was flooded. Johnson found that the workshop that he shares with his brothers is on the first floor but the water level rose high enough to enter the workspace (see picture on the left, Shakeel's workshop is in the unplastered building on the right) . Shakeel who is unmarried, has an orthopaedic disability and is already well into middle age has asked for financial help of about Rs 50,000 (about £510.00/ US$ 813.00) to buy one load of raw material. At the present time he and his brothers are working for other people to tied them over this time without raw material. They rent their workshop and they have not paid their small rent of Rs 1500 per month (£15.00/$24.00) for the last two months because of the difficulties they are facing. They had electric sewing machines that are now damaged but they were using hand-operated machines when Johnson visited. 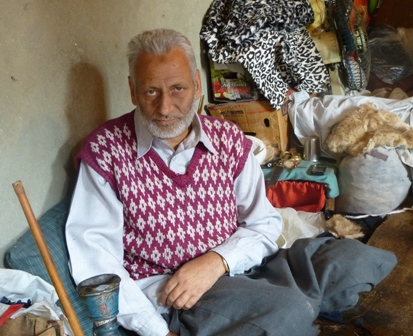 Shakeel in his workplace

Shabir and Mehraj are papier-mâché shape makers, they make ready the shapes that Sajad needs to paint for the lovely boxes and decorations that we buy from Care Kashmir. They lost their raw materials and some finished goods. Shabir had a small lean-too beside his house where he worked before the floods, it was badly damaged and the flood water entered the family home, they have scraped off the plaster in order to allow the bricks to dry out more quickly. The cold weather is beginning in Kashmir and they expect it to be a damp and uncomfortable winter which will make drying their papier-mâché shapes much more difficult than usual. Shakeel has moved to work in Mehraj’s upstairs work space for a while so that he can at least earn something until he can get his own workshop back in working condition. Both men said that they would like to purchase a heater/dryer that runs on gas and electricity as it will allow them to make and dry more products during the winter increasing their turnover and this year allowing them to recoup their losses somewhat. The cost is about Rs 60,000 (£610.00/US$980.00) 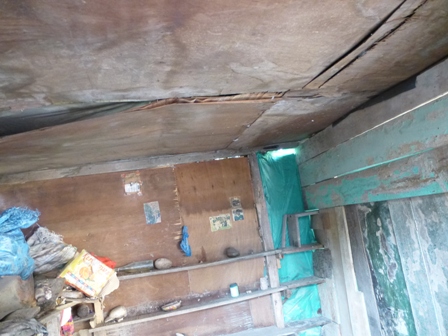 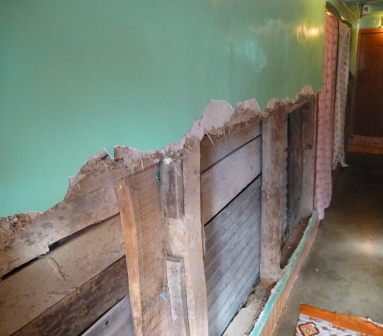 Tariq and his brothers have their own house in the village and some agricultural land. The crop was ready for harvest when the floods came; they have lost that crop and the fodder for their cattle in the floods. They too have returned to making exquisite hand embroidered shawls but to recoup the losses will be a struggle. MESH is committed to providing them with work orders and advance payments as the best way to ensure that they can regain their losses. Johnson reported that the road from Srinagar to Tariq’s village has been badly affected by the floods and the short journey takes nearly 3 hours. Tariq has since communicated that because of the floods he is finding it hard to get the raw materials they need to fill the orders we have secured to help them over this lean time. 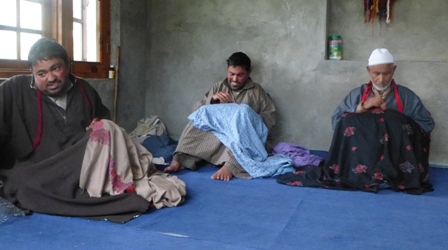 Tariq's bothers and father at work 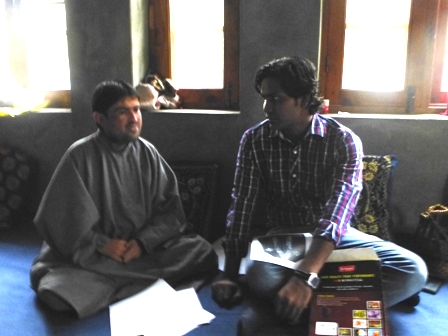 Tariq and Johnson discussing an order

All the artisans said that they have not received any help from the Government for their livelihood and even the promised rice ration of Rs 50kg per month has turned out to be on 30kg per month. They know that the state is reeling under the losses and that they must patiently work and try and pick up as best they can. Johnson was to have met some shop keepers to secure quotations for buying raw material and the special heaters but the central bazaar is still in disarray and the smell of damp is everywhere. Johnson also reported that the hardest hit were those whose homes and work places were built on the river flood plain, that is where the leather workers were located.

You can help, with donations to allow us to buy raw materials for the leather worker or a heater for the papier-mâché shape makers. You can also help by ordering papier-mâché, leather or embroidered shawls, stoles or scarves from MESH.