MESH is Training Fair Trade Trainers From Our Supplier Groups 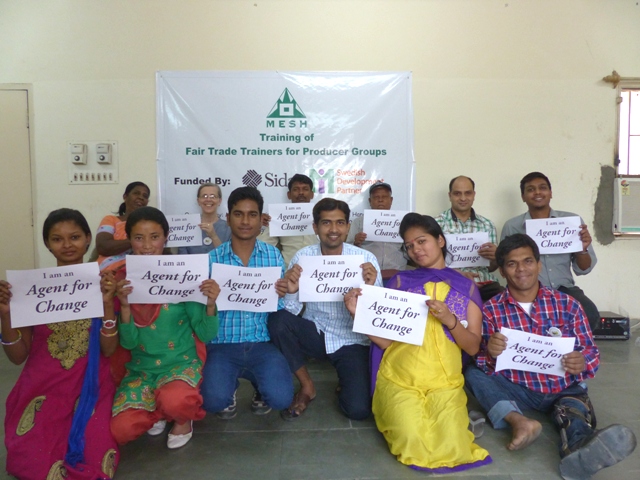 The World Fair Trade Organisation (WFTO) has in the last year or so introduced a Fair Trade Guarantee Scheme which is designed to monitor the performance of its members in compliance with the ten principles of Fair Trade. Each member is to be audited and can choose from the products that they supply which they wish to label with a Fair Trade Guarantee label. The whole process will ensure much more careful monitoring and verification and will involve the creation of improvement plans every couple of years thereby increasing the quality of fair trade year after year.

MESH has been granted funds by IM Swedish Development Partner and the Swedish government development agency SIDA, to train individuals from within the producer groups that supply MESH to be fair trade trainers in their groups.

Gabriel Rajsingh joined MESH with responsibility for Producer Development in January 2015 and last week from May 7th until May 9th he conducted the first in a series of workshops to train Fair Trade Trainers. Individuals from 10 producer groups were present at the YMCA in Hodal, Haryana for a great workshop. The participants were all Hindi speaking but had travelled from six different Indian states and were from leprosy communities and special rehabilitation workshops for people with disabilities. 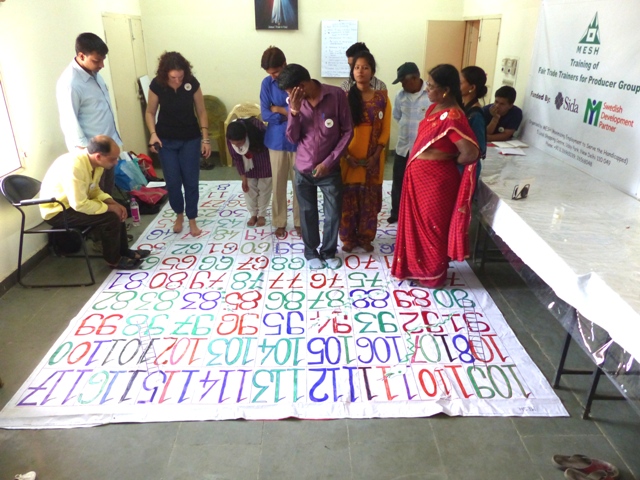 They were given a broad introduction to Fair Trade which included the history and a fun game of Fair Trade Snakes and Ladders. Other sessions looked slightly more deeply at two of the principles; to provide opportunities to marginalised producers and to prevent child and forced labour. Mathew from MESH who is already a Fair Trade Trainer conducted two lively sessions and we were glad to have sessions on leadership and communication conducted by Ashok from Ask India.

The last day of the training coincided with World Fair Trade Day most appropriate as the theme of the day was Change Agents. The climax was the final session on the last day when two of the participants teamed up to conduct a 20 minute training session on the subject of prevention of child labour. Very fine trainers they turned out to be too.

Thanks to a great bunch of participants, their groups members for selecting them so well; to Gabriel for his organisation; to Trash to Cash for making the huge background for the snakes and ladders and to Syamala and Zeevic for the drawings and numbers. This is the start…we have a long way to go but it looks exciting.