Blog
MESH have shared those weaving secrets with the weavers in Bharat Mata Kusht Ashram (BMKA), a leprosy colony near Delhi.
Previous
Next

There is More To a Tea Towel Than You Might Expect!

When Reaching the Unreached stopped their industry section one special request was that they share their tea towel weaving secrets. They were kind enough to do so and MESH have shared those weaving secrets with the weavers in Bharat Mata Kusht Ashram (BMKA), a leprosy colony near Delhi.

The first sample with the new instructions was most satisfying and we asked the BMKA weavers to provide at the same price as RTU which were they a little concerned about. However we made the order and Mathew visited the colony last week to check out progress. The samples he brought back were lovely colours and looked so fresh but they were not yet the quality we wanted. So what had happened? Before ordering I agreed the first sample and then gave them some RTU samples to illustrate the colours we wanted. Somehow the supervisor decided instead of using the 44 reed as in the sample he would use a 40 reed and hope for the best.

Then there were the inconsistencies in weaving. On five looms the variety of tightness of the weave is amazing. One person weaves as if making gauze and another as tightly as canvas for a couple of inches and then loose again for another couple of inches and so on. Nagappa tells us that the loosest weave is that of a person affected by leprosy who says he cannot do anything better and the inconsistent one is the work of the son of people affected by leprosy..he is strong and fit so has no reason for such patchy work. 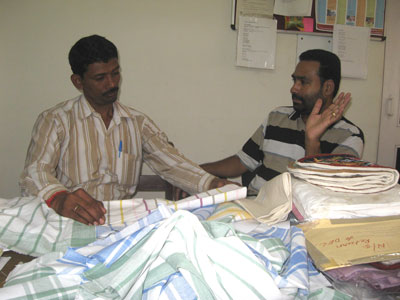 And then there is the price. Nagappa, seen here on the left talking to Mathew says that it is not possible to weave these tea towels on a 44 reed for the price we are asking. Now price in BMKA has long been an issue for MESH. Their handloom prices are high and it is not clear why. So once again MESH is going to go through the costing with them and open up a discussion with other weaving groups to understand what makes BMKA products so expensive. Perhaps the tea towels can be a little more expensive, but only if they are the right quality.

So it is back to the drawing board! Mathew and I (MESH Executive Secretary) will visit BMKA again and look at their methods of pricing and see if we can’t get this lovely new product right. It represents a significant repeat order annually and as such would help us towards our goal of sustainable ordering.