Blog
MESH made a visit to Bharat Mata Kusht Ashram weaving unit (BMKA), a leprosy colony near Delhi.
Previous
Next 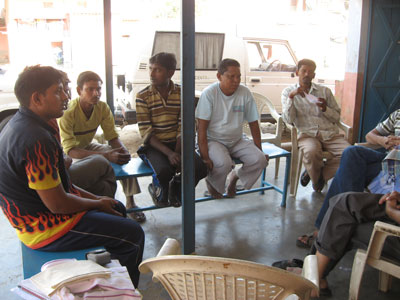 Weavers from a leprosy colony meet MESH staff.
Today Mathew and I and Hrishi designer from MESH made a visit to Bharat Mata Kusht Ashram weaving unit (BMKA), a leprosy colony near Delhi to discuss the best way to move ahead with the new tea towels. There are six weavers and a dyer/supervisor working in the unit and one lady helping with the bobbin winding. We all sat together with one of the community elders (Panchayat member) to discuss some of the issues raised about the quality of the tea towels and also the odd disturbing report that they are earning so little per day (see article below There is More to a Tea Towel than You Might Expect).

The meeting threw up many matters that need attention. Four of the weavers are healthy young men whose parents have leprosy and so the colony is their home. They dropped out of school fairly young and find getting employment difficult which is why they are working at weaving. They are frustrated and disappointed for several reasons. These seem like genuine grievances so we took them up with the Panchayat member present who felt as strongly as they did. He reminded us that the profits from the weaving work together with all donations to the colony are shared equally amongst all the members of the colony (all of whom have leprosy) which includes the parents of the young weavers. He stressed that the weavers are casual about the time they spend at work and if they could be more committed they would earn more.

The conclusions were It occurs to us that the young men at least are working there because they cannot find work anywhere else. They do not enjoy it and dislike the treatment they receive from the Panchayat. We have a way to go yet but it will be worth the effort.

I must report that one of the weavers who said last week that he earned only Rs 50 per day was not there today. His colleagues all confirmed that they earn on average Rs 3,000 per month and they work six hours per day on.