Blog
The tent was up and the music playing about three on Saturday afternoon and the children started to arrive for the first part of The MESH fair Trade Show 2009.
Previous
Next 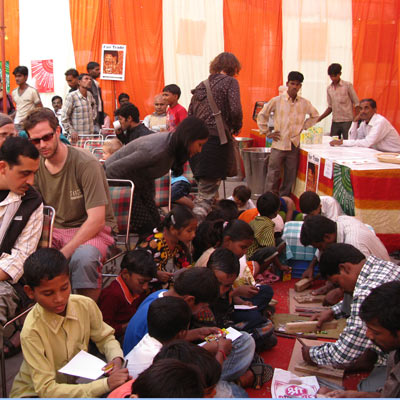 Drawing competition in full flow at MESH Fair Trade Show 2009
The tent was up, the music was playing and the children started to arrive for the first part of The MESH fair Trade Show 2009. We had invited a group of children from Bharat Mata Kusht Ashram, a leprosy colony in Faridabad; their arrival served to attract the local children and gradually the visitors trickled.

November 14th is Children’s Day in India so it felt right to make sure there was plenty for them to do. Mathew started off with a wild and loud game of pass the parcel with four balls instead of a parcel.

Sitting and working on one side of the tent were wood carvers from South India, stone carvers from north India and weavers from western and southern India
The children were encouraged to look at the artisans and then gather into groups to list out what they had seen and found out. Later they took part in a drawing competition with each child asked to draw something she saw happening amongst the artisans. The winners drew the weavers at work and a copy of one of the stone carvings.

There was a lively puppet show in mime with the most amazing bird noises and then a few minutes reflection before a performance of a thought provoking play about fair trade from five volunteers, all young men from an organization called Manzil.

After snacks and soft drinks and a spot of impromptu storytelling and singing from the children, the grown-up part of the programme began. Many parents had already been into the MESH shop or looking at the work of the artisans now it was their turn to watch a re-run of the play before a brief message from the Charge d’affaire of the Embassy of The Czech Republic; a panel discussion and finally the launch of MESH soft catalogue 2009.

Jacky Bonney, Executive Secretary, MESH presented a few broad points about Fair Trade. She was followed by Amita Joseph Director General Business Community Foundation and a member of MESH Executive Committee. Amita shared that her own trading efforts and promotion of a movement (for Abilities Mela around India) had started small and taken shape in various styles until it is now an event held in all parts of India and most especially in provincial towns from Kerala to Ladahk. She suggested the innovative use of the internet to promote the Fair Trade Movement in India.

Mr. O.P. Yadav, Programme Director with Fair Trade Forum - India highlighted the fact that that FTF I has done much work to publicize and promote Fair Trade amongst the student population. The total Fair Trade turnover of FTF-I members last year was about Rs 15 million and that whilst Fair Trade in food was big in western countries it is less so here perhaps because there is a huge crafts tradition in India.

The gathering thinned out a bit so that it was mostly ex-pat guests present for the panel discussion which just served to highlight the point made by Michaela Kreutova, Czech free-lance journalist and MESH volunteer. She said that Fair Trade remains a largely unknown movement in India and that a focused and concerted effort to publicize Fair Trade was required. She particularly noted that very little is known about where Fair Trade products can be bought even in Delhi and that if people could find them she is confident thye would be ready buy them. (Mr Yadav later informed the house that there are four Fair Trade Shops in Delhi.)

Kirtika Singh Director-Product Development and Sales at Community Friendly Movement (CFM) reminded those present that it is essential to ensure quality, market driven products and an acceptable price to achieve success in Fair Trade. She highlighted that CFM is unique in sharing their monthly accounts on their website and they have been innovative in keeping note books with the artisans to record their monthly wages so that they can look back and see the pattern of earnings and make lifestyle decisions based on those trends.


From the floor came a suggestion that Fair Trade should be promoted amongst NGO’s and particularly Fair Trade for agricultural products.

The catalogue was launched by Jolan Rusz, from IM Fair Trade, Sweden and the programme closed with a slide show of the products displayed in the catalogue made by disabled and leprosy affected artisans from around the country.

It was a modest start, 132 information packs were distributed (only to adults) and at least 50 people who have never come to MESH before saw the shop for themselves…we believe the word is out and our task now is to keep up the momentum.

Our special thanks go to the artisans that traveled from all over India to be with us to demonstrate their crafts:
Thanks also to the Manzil team of young people who took the time to learn about Fair Trade, write a play and then perform it. We are most grateful.

The MESH fair Trade Show 2009 was funded by IM Soir, Sweden.
Next
Previous