Blog
Fair Trade Plus is enabling Indian producer groups to improve their business through greater engagement with the Fair Trade movement.
Previous
Next

MESH and the Fair Trade Plus Project

After successfully running a number of projects MESH signed a MoU with Fair Trade Form-India to depute Mr. Mathew KK as a trainer on a project called Fair Trade Plus. The project has been running since October 2007.

Fair Trade Plus is enabling Indian producer groups to improve their business through greater engagement with the Fair Trade movement. This project aims to increase the number of producers engaging in fair trade and increase the income of those already involved by generating a greater understanding of fair trade market. It takes a key partnership approach working with European Fair Trade Buyers as well as producer groups in India. This project aims to take the producers closer to the market. 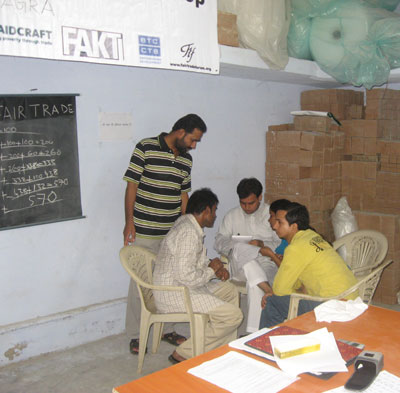 Mathew from MESH conducting a Fair Trade Plus Training in Agra

For the smooth flow of this project, many activities were conducted. To start with, Fair Trade Form India in collaboration with Traidcraft U.K. selected 10 trainers from India, who would collectively deliver the key role in the project. To enable this we got many opportunity to take part in a number of preparatory activities such as ToT workshops, hand-on trainings and exposure visit to selected FT markets in the EU (and many other activities)

One of the initial steps of the project was Baseline Survey of the participating groups. In the Survey, a consultant of Fair Trade Plus visited the groups to collect information about them in a simple/specific questionnaire. The survey is aimed to get a brief idea about the groups which would help the project team of Tradecrafts/ FTF-I to organize training to groups in a more focused way. 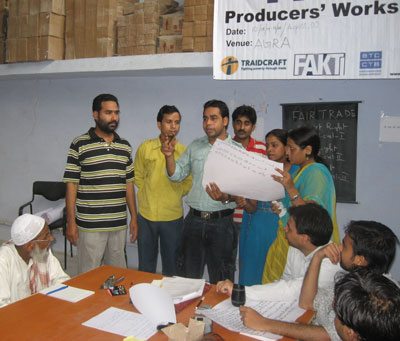 Mathew from MESH (left) conducting a Fair Trade Plus Training

It was a challenge for Mathew to find adequate time for delivering these trainings to the groups. But keeping in mind MESH’s goal, the management felt it was very important to adhere fair trade standards and promote its visibility at the grass root level. So the management extended all the support to Mathew for completing this project and making sure that he delivers it as it was expected of him.

On a follow up visits to these groups I found that changes are taking place. They have now a better understanding of what is fair trade, why they need to follow fair trade standards and how it is beneficial to them. The immediate impact was very visible from their actions - now the artisans are not going to the cycle repair shop that employs children and they have planted a lot of trees in their vicinity. Again the impact is visible in Little flower leprosy colony, Bihar - the management started an evening classes for their illiterate women for basic education. We need to wait for some more time to see the big changes…… but we can not stop because of this; we need to keep the stone rolling until and unless the last person of this country brings some changes.

I expect and confidently look forward that FAIR TRADE PLUS project will suitably benefit the Indian fair trade fraternity with special attention to our fair trade grassroots who wait for practical guidance and effective marketing assistance. The project is very much meant to provide all round assistance and expertise to Indian fair trade in the direction. 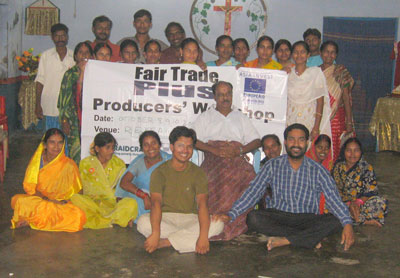