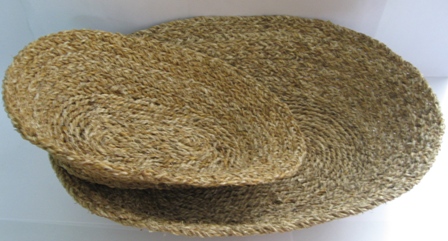 The baskets which have sent us bananas!!

On the 29th April this year MESH were delighted to receive an order from a new customer in England. “Nkuku”, based in Devon, who selected some banana fibre baskets hoping for delivery by the middle of June.

Our Artisans from the Anandam, Santosham and Florence Nightingale groups in Tamil Nadu, South India indicated, that the timescale was not possible to work to so a split order was agreed for some baskets to arrive in July and the balance in September. On the 18th of May the first samples arrived but disappointingly the quality of the fibre used was not as envisaged, it was too coarse and chunky, so they were rejected.

This is where the story gets interesting!

It transpired that the twisted raw material that had been used initially, which was purchased from local markets, was no longer available. The thinking caps went on and eventually Sumati at the Florence Nightingale self help group came up with a plan. The plan was to make the raw material from scratch. the manufacturing process went from the artisans simply coiling and sewing the baskets to them having to shred the banana fibre, twist it, then plait it before it being coiled and sewn into baskets. 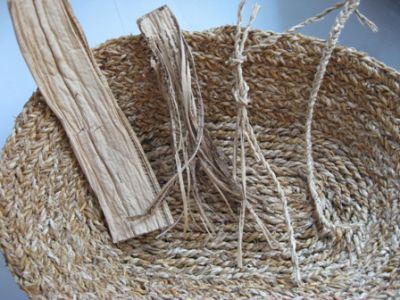 
As a result of the addition of three further processes in the manufacturing line timescales have been extended on more than one occasion.


The job has been a difficult one in no small part due to the distances involved and language difficulties. The travel time involved between MESH Delhi, where the order came in, and the location of the workforce is over 40 hours by train so going to visit to see the process first hand has been prohibitive.


On the 3rd of August, with much relief, the first part of the order arrived in Delhi.


We are extremely grateful to Nkuku for bearing with us in resolving these difficulties!


The end result is however that we now have a fantastic end product which is eco-friendly, unique and fully bendable so travels well. MESH feel extremely proud of this product which involved three separate groups of Artisans working together.


The English will be the recipients of the first of these baskets although an order has now been placed from Sweden for delivery next Spring.


I guess this is what Fair Trade is all about!


The Hindu Festival of Raksha Bandhan was celebrated this year on Saturday the 13th of August being the full moon day in the month of Shravan in the Hindu Calendar.

This was a busy time for MESH who attended no less than four outdoor sales. Three were staff sales in large corporations and the fourth in a leading Delhi hotel.

This festival celebrates the bond of protection between brothers and sisters. It is customary for sisters to tie a thread (“Rakhi”) round their brother’s wrists and in turn they receive Rakhi gifts and sweets. It is the case that although the festival has its’ origins in Hinduism it is neither limited to Hindus nor blood relations between brother and sister.

Lord Krishna had a bleeding finger, Draupadi tore a strip of silk off her sari and tied it round his wrist to stem the flow. Touched by her concern Krishna declared himself bound to her by love. He further promised to repay the debt manifold and proceeded to spend the next two and a half decades doing just that!

Queen Rani, a Hindu princess, sent a rakhi to the Great Mughal Emperor Humayun, when she was threatened by Bahadur Shah of Mewar. Humayun promptly abandoned his ongoing military campaign to come to her rescue.

Leprosy is an infectious disease known since biblical times. It is characterized by skin patches, nerve damage and progressive dehabilitation. Contrary to folklore, leprosy does not cause body parts to fall off, although they can become numb and then diseased as a result of infection. Leprosy is curable but people who have been disabled or disfigured by leprosy still face many social issues

MESH’s Executive Secretary Jacqueline J. Bonney wrote the editorial for the above issue entitled Responding To The Socio-Economic Implications of Leprosy] Editorial

Have you thought about Christmas yet? We Have!
The MESH basement is filling up nicely with rugs, scarves and mat sets shortly to be dispatched Down Under. Christmas napkins form part of that order. At present the items are being checked, labeled and packed.

175 lovely tatted snowflake Christmas decorations made in Anand Mahila Mandal a women’s society in Anandgram leprosy colony have taken off destined for a small gift shop in Dorset, England. They were trained by a British Craft Teacher, Eve Goldsmith. 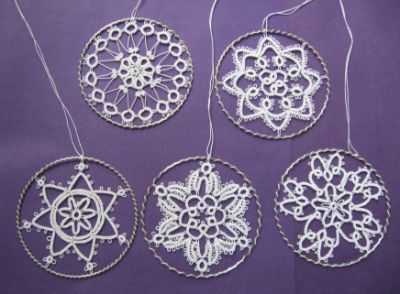 Thanks to Rhona Royal, MESH volunteer, for this news report.
August 19th 2011
Next
Previous