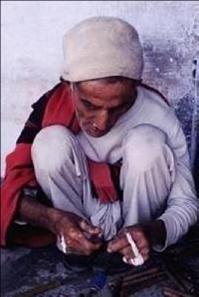 Maya Ram card weaving
This is a longer story today but I am including it in full as it came to me as an insight and tribute to the work and lives of the people of KKM, a group of leprosy colonies in N. India.

KKM News IX (Dedicated to Kurukshetra)
Maya Ram, or the Illusion made Real.
With Tribute to Man Bahadur’s devotion

In 1980 a half-cured leprosy patient aged about 45 came to our small member group Navjeevangram (“Village of New Life” started out of nothing in 1977 in a dry river bed housing today 10.000 people at least)
At that time the first hostel had been built in the compound for such homeless, helpless leprosy patients wanting to work himself for his own food and total cure and self-, if not social- rehabilitation.

The group of a dozen ex-patients there were happy to help a brother in need, as well as a pair of hands to be a link in the long processing textile chain which KKM head-Quarters and exports partners were requiring.
Humbly, (I never caught even his name!) he spun cotton yarn, and promoted to loom bobbin feeding, and even creative ribbon card Weaving, day in, day out, for the next thirty years.

Fortunately, that a record be kept of his steadfastness, bordering on austerities for 3 decades, alone (he did not remarry, as most), a group of sterling supporters from Belgium visited and had tea with the 28-strong Navjeevangram People on New Years Day 2010. Several photos were taken including the one I can put in KKM’s archives, of Maya Ram, at work.

By then, Maya was nearing 75, and came down shortly after with a strong hemiplegic stroke. He got stabilized somehow, but bed-ridden alone in his room, the situation was becoming rather dramatic.

Without involving KKM, the still strong leaders, Lakhi Ram, (late) Matwar Singh and Man Bahadur approached the Government Hospital, Dehra-Dun (-without patient to speak of in these Leprosy-Eradicated times!-) Maya Ram was accepted, for treatment and bed-care, hopefully till his last.

Life and work went on in Navjeevangram in that year, till mid-2011. The group had a black year, 2 workers retiring, loosing 2 more aged co-workers, and the catastrophic sudden loss of Matwar Singh, at 50. The whole group was reeling under these shocks, staggering to get simply working. With the initial leader Lakhi Ram semi-retired, they had to elect a new “President”. Only Man Bahadur was somewhat literate, the obvious choice! But what about a man for all season, as “Secretary”?

As often, blessing came in disguise. A young man cured from light leprosy, with a sane wife, but 5 toddlers, was ready to join. The small, independent KKM-Group, was tempted, but for having to cater and shoulder the education of 5 under-ten children. They came to KKM for extra support. Reassurance they got, immediately, (of course), and Kishan Lal was put on the very tough job, of organizing next to everything.

Having just started helping the family to settle, in mid-summer heat, the Group President, Man Bahadur, suddenly, had single-handedly, to nurse his completely bed-ridden wife Mangali Devi, - till her last breath in October 2011-
….
Out of nowhere reappears Maya Ram limping.

“I have been discharged”

“But you are not a member since a year”

“May I take back my room, and get my retirement pension?”

“Sorry we have our hands full, and we cannot afford one more mouth to feed, nor do we have anybody to help you, in case you have a relapse”.

So Maya Ram came for comfort to KKM Headquarters.

Now years before the rule had been laid down that once a person was away for more than three months they could not return …mostly because some people had come and gone begging at will and then complaining and upsetting life. The stress borne by the groups from such people was very great and hampered very much the long march of the “KKM People”.

Now, we put our heads together, to find a way out of inhuman cruel exile. From the story related above, a harmless, simple soul as Maya, could not be equated to the previous sad lossers. As the Treasurer, with donations obtained before the asking, I had an easy part to play and say that the financial costs are no problem neither now, nor later. Money is all very useful, but in their shoes, the main problem remains: who is going to look after him 100% when the time comes sooner or later? Easy, again for me to say to employ on a salary basis, one of the hundreds of unemployed leprosy patients or their children in the immediate area, knowing by dire experience that it is just a dream. Forget any common caretaker, who would simply not enter the compound, even for an executive salary.

Finally, at least with a comfortable money cushion, the group Navjeevangram took back Maya, in his previous room.

Man Bahadur saw the passing away of his wife and got her cremated and her ashes taken to Mother Ganges a few days later, and started to take a few lighter breathes around October ’11, just when Maya Ram got much worse, and was totally bed ridden. There was no one to care for him, no one available to hire even and so Maya Ram was left without care except some milk and lentils soup…

I was keeping posted about the non-happenings, and very soon, Man Bahadur again, noblesse oblige as President, volunteered to do the full possible service to Maya, on top of his tough routine duties, including weaving…

I could not do less than give him carte blanche for the expenses, and come in person to bring with me all the friends of KKM Handweaving and salute him and Maya, half-gone, but recognizing me.

By the end of November, Man Bahadur was getting overwhelmed and asked by telephone moral support from us. When Maya started not eating any more, Man Bahadur came to ask for concrete help, if possible (????) and fortunately suggested himself what would suit Maya Ram’s predicament : Milk and, fruit juice. I repeated that he could purchase the needed milk as long as necessary, and since I have a carton of large sized-orange pure pulp juice around for my vitamins intake, it was not difficult to make them an immense pleasure in giving the last current litre concretely in his own hands.

Mid-December, a week later, Man Bahadur came to headquarters a last time, telling us that he was at the end, and how to cope? We assured him, that KKM was backing him, and his co-workers. Dissatisfied with this human and mundane brotherly talk, I was seized by an inspiration: What makes really a difference on any death bed, especially to an Hindu? Surely it is to attain complete liberation on the banks of the Ganges, and be taken in the Hands of Mother Ganga. It was out of the question to transport him to Rishikesh or Haridwar, but in the last analysis, it is not the place which matters, but the liberating water from the holy river.

Then we remembered tomorrow morning is the fortnightly meeting of the KKM Groups managers, and I was on my way to phone Raju, at Brahmapuri, on the Ganges bank, to bring the Holy Grail tomorrow. On my way Lila and Rumal Singh said that they have always in reserve a pot of Ganga Jaal (water) in their room.

Action! The copper vessel was in the hands of Man Bahadur jumping on his cycle, and Maya expired with a drop of Ganga water on his lips.

Nay! Mother Ganga came to him specially in the hour of his need and took him in her fold.
May we all be loved as much!