A Thought for World Disability Day 2015 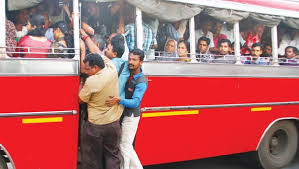 How easy was it for you to get work this morning? Can you remember having to climb up a steep curb or turn sideways to shuffle between parked cars? Was there a tremendous rush and crush to clamber up into the bus or were there steps in the station? Once on public transport was it difficult to work out when your stop was coming up? For you those things might be just a nuisance but for a person with disabilities that might be the reason why they cannot work at all.

According to the Indian Population Census 2011, there are 2.68 crore (26.8 million) persons with disabilities in India, although, in reality, this figure could be much higher. Many of these people given accessible education and a barrier-free society could be contributing to growing India. Twenty years after the existing Persons with Disabilities Act 1995 was passed which has provisions relating to accessible transport and road facilities we still do not have accessible buses, trains and road facilities for persons with disabilities.

Fifty buildings in 20 cities is just over 2 buildings per city! 10% of public transport ….so that a person can get to work in one of those 2 buildings in their city….will that mean letting 10 buses pass before a person can find one to enter! Certainly the government must start somewhere and it is good that they have a plan at least, but wouldn’t it be better to simultaneously pass legislation for all new buildings and public transport to be barrier free and then provide penalties for those not complying as was suggested in the early drafts of the Rights of Persons with Disabilities Bill?

Think about it, 2.68 crore people (26.8 million) is about the population of all the Scandinavian countries combined and we all know how well off they are; what might India be missing by leaving out 2.68 crore of its own citizens?
Next
Previous