MESH at the time of Corona Virus 2 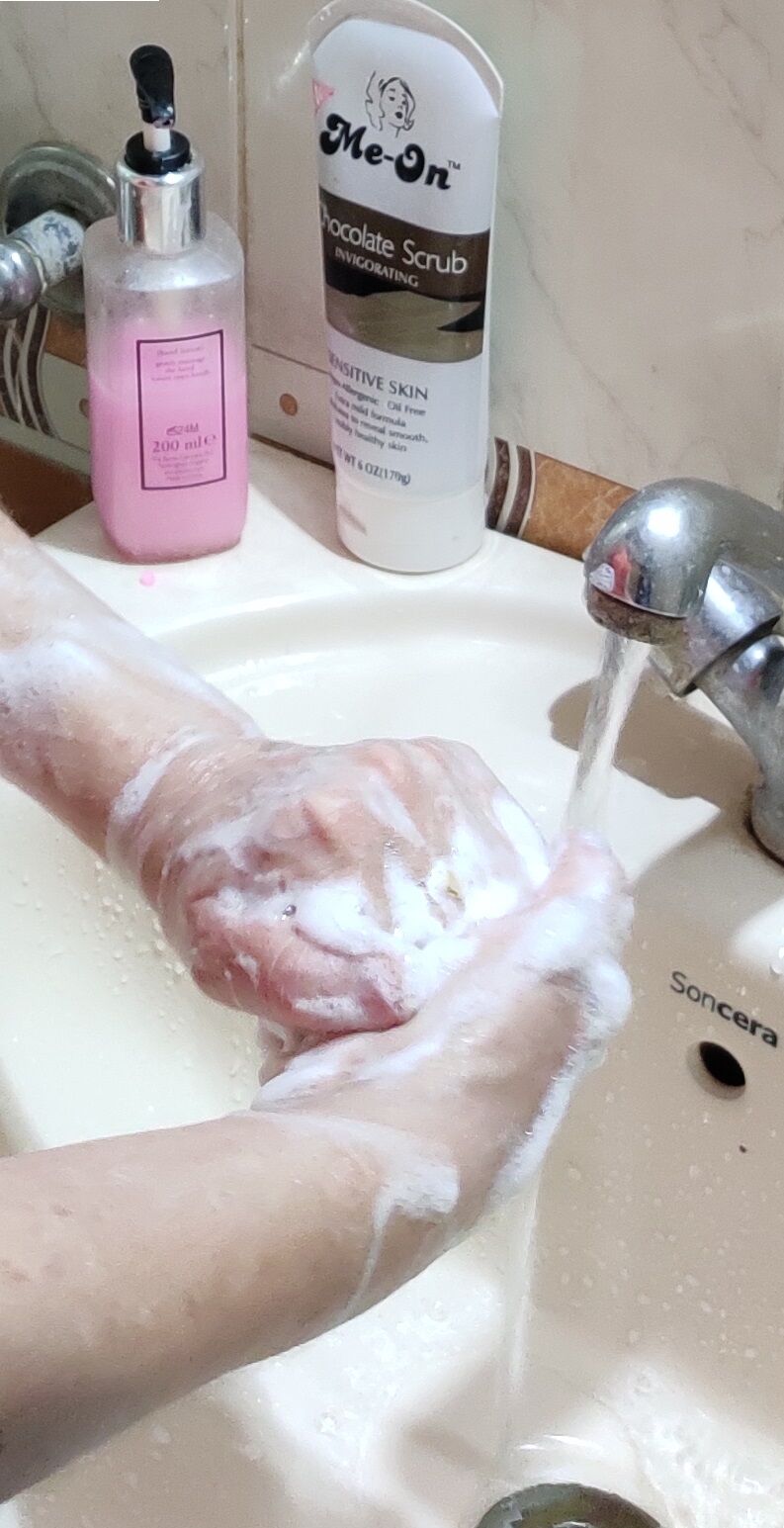 Many of you will be locked-down but not all as tightly as we have been in India. Since 24th March we have not been allowed out of our homes except to buy provisions and that too in shops as close to home as possible. Of course the exceptions have been for essential workers. The first lockdown lasted until April 14th and then yesterday the Prime Minister spoke again to the nation asking us all to observe an extended lockdown until 3rd May. He spoke about how we had endured well and how the confirmed cases grow and sadly the deaths grow but there have been very few ( 11,933 confirmed cases and 392 deaths as of 5 pm on 15th April) and we might all be glad to attribute that to the observance of such a tight lockdown. Most of us expected an extension but for a few thousand migrant workers stuck in Mumbai yesterday it was a hard piece of news and they rioted. Their dismay is understood, many, many, thousands of men and women are far from home and not earning. They desperately want to return home but since state borders have been closed they cannot. They may be receiving daily ration from the government and perhaps their wives and families in the villages are also receiving dry rations (although it may not be so everywhere) but without money, without cash, life is frightening.

Let me tell you about Andhra Pradesh, the state government was quick to distribute dry rations house to house and a day or two later vegetables. Government appointed volunteers have been calling house to house to ask about the health of the people living there. Then one day they came with Rs. 1,000 in cash for each family. Permission to go shopping has been only from 9 until 11 each morning and now in Guntur District where Bethany Leprosy Colony is located, there is a large number of covid19 cases so the district has been classified as a red hotspot with stricter lockdown.

We have been in conversation with the tailors of Jone Pryadarshini Mahila Mandal (JPMM, a women’s society in Bethany Leprosy Colony) who were working from home making masks. They have reopened the sewing unit with just four tailors working in rotation to ensure social distancing. They are working on an order for an international buyer, as they had the raw materials in stock. There is a lovely veggie bag order for them for a German fair trade organisation but the raw material is stuck in the lorry office and they have not been able to receive it because of the lockdown. For many of these women with their husbands not permitted to work yet, their income will be the only one for their families and so we are anxious to find ways to keep them working either from home or in small numbers spread across their workshops to maintain distancing, 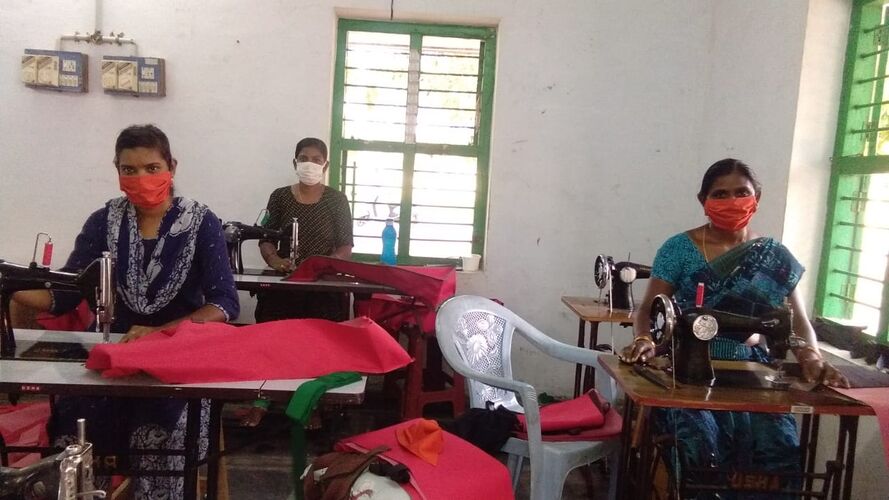 Little Flower Leprosy Colony straddles the border with Nepal near Raxaul. They have heard that there are three confirmed cases of covid19 in the neighbouring village across the border in Nepal so the security at the border has been heightened. In that leprosy colony and the 21 other leprosy communities in the area the people affected by leprosy are mostly elderly and therefore particularly at risk. Little Flower has a weaving unit which has had to close down but they have lots of cotton fabric in stock and we have been able to commission 3000 masks for free distribution to the elderly and highly vulnerable people affected by leprosy. Another NGO has distributed rations to those communities who suffer badly from the lockdown as many of the members usually go begging for their daily bread and that is of course not now possible. The Bihar state government have not distributed any free rations to the people in Little Flower, they may receive them on 25th April….it is a poorer state and less efficient than Andhra Pradesh, the hardship for the poor will be significant especially as many migrant workers across India are from Bihar…now we can see why migrant workers stuck far from home will be so worried for their families and how this struggle is very hard on women.

During the week MESH’s Chief Manager Mathew, and I were invited to join a conference call whose participants were all receiving funding from Sweden through Soir IM. Some organisations are involved in rural work and other are based in cities co-ordinating work across India, like MESH does. None of the 19 participants knew of any positive cases of covid19, which was a joy and there is a keen sense that our donors want us to change the projects to make them more relevant in the present and new situations we find ourselves in. Our task is now to identify what we should change from our planned activities. Certainly for MESH supporting ways to keep people able to earn is a major focus. One interesting problem the city based NGO’s all reported facing is an inability to get into our own offices. There is only so much we can do from home.

New initiative in MESH “some people are worse off than we are.”

One new initiative from MESH is to work with a youth group in a leprosy colony in Faridabad, about an hour south of Delhi. The young leader of the group Hanumanta appa said he thought there were people in a worse situation than in the leprosy colony and he identified a number of families in the neighbouring slums. MESH is offering to provide basic food stuffs and a hygiene kit for each of the 41 families identified. Hanumanta believes he can source the foodstuffs in bulk but wonders how he will manage to package and distribute it. Hopefully in the next couple of days it can be worked out with the support of the local authorities and the practical help/supervision of two of MESH staff team who live in the leprosy colony.

A primary focus of MESH’s work-from-home activities is to keep international buyers informed of what is going on in India. Many of our Fair Trade buyers are still doing online sales in their countries and if they have stories and information to share they can keep their final customers informed and help them to feel they are contributing towards the worldwide effort to minimise the economic impact of this dreadful virus. The ubiquitous smart/mobile phone is a wonderful asset at this time and even as I type this our designer is on a Whatsapp call with tailors in JPMM, in south India collecting data on how they are managing personally and as a group.

As an organisation we have started to place orders for products with no immediate customer in mind. It is a long time since MESH stopped buying for stock, preferring to buy against orders or else limited supplies for domestic retail. Now we are ready to take a risk so that artisans can earn something at this very lean time for their whole families.

As with all countries, education is affected. MESH sponsors some children through school and has provided loans to other young people for higher studies, Gabriel will be contacting them all to find out how this pause in education is affecting them as for most, online studies are quite simply not an option given the size of their homes and the lack of internet. Narayan, a tailor and weaver from the Faridabad leprosy colony reported that his daughter was in the middle of writing her 10th class public exams when the lockdown started. She had two more subjects to write and he has no idea what happens next especially as she also has to change schools after 10th standard and he does not know how applications to a new school will proceed. Those young people from Little Flower Leprosy Colony who are doing higher studies and vocational course across the country were all sent home on 14th March when educational institutes were all shut down, many had to travel for several days but they all reached home. In the new lockdown some activities will start again, but educational institutes are not included.

The predictions for the economic effects of these weeks of lockdown are mind boggling and so whilst wanting to keep people safe the Indian leadership is also aware that the economic burden must be kept to a minimum.
If we take the case of Andhra Pradesh state I mentioned above. If the government has given free ration, vegetables and Rs 1,000 per family to every family who falls in the “Below the poverty line (BPL)” category who holds a BPL ration card then the numbers of beneficiaries might be as much as 7.5million in that state alone. The cost to support people out of work is very high.
Next
Previous