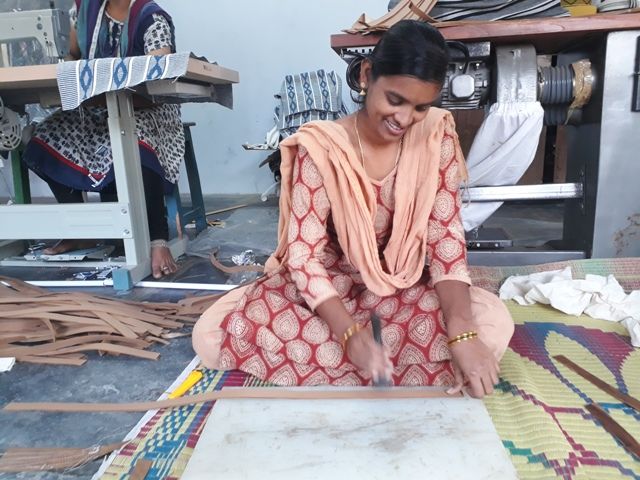 Evangeline will be 30 in 2019 she is married to Wesley who is a photo journalist and they have two daughters, one aged 15 and about to enter 10th standard at school and the other aged 13 . Evangeline’s father had leprosy and for most of her growing up years he went begging to bring in money for her Mum and their four daughters. At one time he asked the administration in Bethany Leprosy Colony where they lived, if they would find funding to pay each man and each woman Rs 1,000 per month so they could stop begging. When questioned further though he had to admit that with the expected costs of marrying off four daughters that would never really be enough.

Evangeline left school after 9th standard, spent one year at home where she taught herself how to use the sewing machine and then she was married. As a young woman married within the colony she was eligible to go and work in the weaving unit where she learned how to weave cotton tapes which were sewn into brightly coloured bags for sale in India and abroad. She also learned how to wind bobbins for the broad loom and has always been very practical and interested to learn new skills. The weaving work was never enough for all women to work all the time so when Jone Pryadarshini Mahila Mandal (JPMM), a women’s society in the colony, started production she would work part time in the weaving unit and the rest of the time sew bags for JPMM.

Her interaction with MESH grew after she became involved in sampling during workshops conducted by MESH Designer and when leather trims were added to the traditional all cotton Bethany Bags Evangeline was quick to volunteer to learn the new skills involved in cutting and sewing leather and more recently in using canvas and tape to make bags for a Japanese customer.
Evangeline uses Whatsapp personally and was very willing to act as a go between for messages between MESH designer and the production team in both JPMM and Bethany weaves. Her smiling face is often to be seen on our screens in the Design Studio.

“I use my earnings to meet household costs and especially for anything my daughters might need. My husband and I don’t like taking loans from money lenders. I am a member of a women’s savings group and have been able to apply for a group loan three times. I have repaid each time and using that money along with the housing grant from the Government House Building Programme we have been able to build a new house with slightly larger rooms and an added balcony.”

Evangeline only gets paid when there is work as she is paid piece rate. Between January and March 2019 she earned Rs 5,000 in the weaving unit and Rs 9,000 in JPMM. The JPMM income was steady because of an order for 40,000 net veggie bags for a German Fair Trade wholesale company.

“I am not the fastest tailor but then I make less mistakes then the very fast ones and since quality is important it means I don’t have to unpick and re-stitch as much as other people. I like sewing and enjoy the atmosphere learning new things, increasing my knowledge and skills all the time."
Next
Previous