Expelled From Home for Working - Now a Supervisor 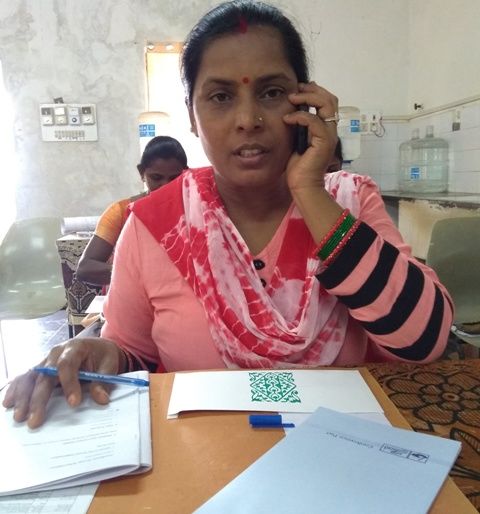 Sita Devi was born and brought up in little flower a leprosy community in Raxual, Bihar which lies across India and Nepal’s border. Her father had moved to little flower for leprosy treatment and rehabilitation during his early days. Both her parents worked in the colony, her father as a carpenter and her mother worked on the colony farm. Sita says it was a struggle for her parents which was only eased when salaries for their colony work increased a little. Sita went to the colony school until 5th standard and then to a school in Raxaul for 6th until9th standard hen she stopped going to school and married Mr. Rajesh.

She and her husband lived with his parents but she says “after our children Rohit and Anusha were born I wanted to help with family finances. My husband worked in a medical shop but I thought I could work in Little Flower, keep my children beside me, manage work at home and still contribute to the family income.”

She joined the production department and was asked to learn spinning of silk from the silk cocoons.

“My father-in-law was furious with me for going to work and locked me out of the house for two days, Brother Christodas found out and convinced my father-in-law to let me work and live at home, but there was too much tension in the house because I had gone against his wishes, and eventually the colony elders allocated a separate house for my husband and me and our children.”

“I worked for a while on the colony farm but I could not keep the children with me in the rain and so I returned to the production unit. I had to work hard to keep up the number of pieces per day as we were paid piece rate.”

Now Sita is one of the supervisors in the production unit responsible for monitoring production. She is the contact person for MESH in respect of orders and production follow-up. And she has attended a number of capacity building programmes organised by MESH and shows signs of personal growth with each event. In 2018 she travelled for four days alone by train to attend MESH’s Network Meeting. Perhaps her early courage in confronting her father-in-law for the betterment of her immediate family prepared her for the confidence that she now displays in her job and during training programmes.

In July 2019 Sita brought two Little Flower tailors for a weeklong workshop learning how to improve the quality of their sewing and how to make several new products. She took a keen interest in the quality standards expected so that she can better monitor during production and she spent some time with MESH's Social Worker, Gabriel learning how she can use her own phone for checking e-mails and communicating with MESH. She and the tailors also visited a tailoring production unit run by Society for Child Development whereshe asked good questions about maintaining high levels of production with good quality. We hope she will practice some of the things she has learned during her time in MESH.

Sita's children have done well in their studies. Her son Rohit, is pursing MBA in Bangalore and Anuradha is studying B. Sc Nursing from Mangalore. Sita says - “I am glad that our children are able to do higher education and get exposure outside of this small town.”