MESH started to trade with the Czech Society for Fair Trade just before Christmas 2009 so we were delighted to hear that three of their members were planning a trip to India and wanted to know if they could visit any of the groups that supply MESH.

Tomas, Vanda and Vasek arrived in Delhi just after the onset of the monsoon, when it was suddenly noticeably cooler than just a couple days earlier when the temperature had been more than 40 Celsius. 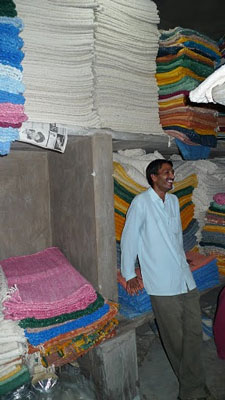 Noel in the storeroom at KKM

They visited Kurukshetra Mandal Handloom (KKM), a leprosy community in Dehra Dun where they learned more about how the cotton yarn is spun, dyed and woven by elderly men and women affected by leprosy. MESH had encouraged them to visit the store rooms there and were were glad to hear that they selected a whole range of products off the shelf to export to The Czech Republic later in the year…always a great help in KKM where age related problems make weaving to order more challenging with every passing year.

After a spell in Darjeeling they returned to Delhi and spent one day visiting Bharat Mata Kusht Ashram’s (BMKA) weaving unit in Faridabad just outside Delhi. The weaving workshop in that leprosy colony is much smaller than in KKM but as MESH Design Consultant was present he was able to explain the weaving processes and the work that MESH Design Studio has done to change textures and designs of weave in BMKA. 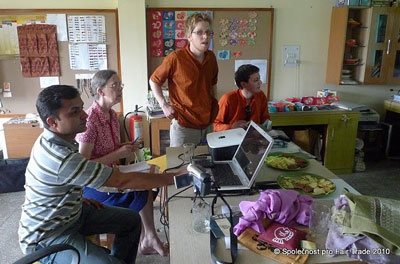 The next morning they spent in MESH Design Studio looking at catalogue products with the designers Hrishi and K. Syamala, and Jacky Bonney MESH's Executive Secretary. We discussed possible delivery schedules and what is most likely to sell for them in the future.

Tomas explained that they have several shops and sales outlets but that they have tended not to focus of promoting particular products, a policy which will change in the coming months and which is likely to benefit MESH’s suppliers.

The early afternoon was spent in MESH shop selecting products to take home as gifts and meeting Mathew, who worked with them for the first shipment. It is never easy to build a relationship with a new company so we all felt that this visit was a great opportunity to discuss business and a fine chance to understand each other’s work better.

Selling to an eastern European country is new to MESH and it was valuable for us to learn about how Fair Trade is beginning to garner more interest amongst people who were earlier ruled by communist governments. 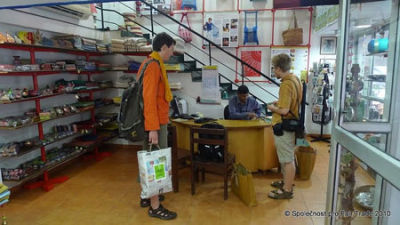 Thanks to The Czech Society for Fair Trade for these pictures.
Next
Previous