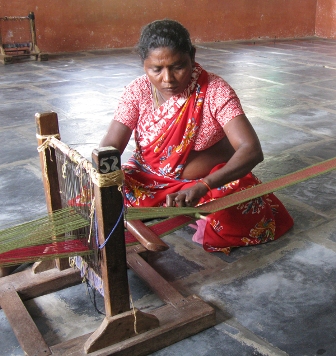 Esther is from Bethany Leprosy Colony in S. India, affected by leprosy long ago, she has been treated and is cured but the sign of her having had the diseases are in her bent fingers. For years she worked as the assistant in the colony clinic. Before becoming a ward aid she learned how to weave in the weaving rehab unit that used to run in a converted chicken shed. Started to provide work for the women in a colony where most of the men went begging for months at a time across India, the weaving unit has grown and mostly now employs the grown up daughters and daughters-in-law of Esther's generation.

In this picture Esther is weaving one of the wonderful Bethany bags available in MESH. Esther's husband, MohanRao died suddenly a few years ago and she now depends upon her own income and that of her only son.